Gaps in satisfaction are narrowing among brands

Satisfaction is highest in the display screen factor, while there is room for improvement in the ease of use factor

The study, now in its 14th year, measures customer satisfaction with aftermarket in-dash vehicle navigation systems. Six factors comprised of multiple attributes are examined (listed in order of importance): navigation function (27%); audio and video function (18%); display screen (18%); design and texture (17%); ease of use (14%); and other functions, apps and services (5%). Satisfaction is calculated on a 1,000-point scale.

“Customer satisfaction has increased for the audio/image quality and the display screen, on which vehicle owners place high importance,” said Hayato Iwakura, manager of the automotive division at J.D. Power Japan. “This improvement in satisfaction is a result of the continuous efforts of manufacturers to improve navigation systems to meet the expectations of their customers. This study also finds that the increase in score is driven by satisfaction with smartphone connectivity to the navigation system in order to play music or movies.”

Alpine ranks highest for a ninth consecutive year, with a score of 694. Alpine achieves the highest scores in all six factors among all brands included in the rankings. Pioneer (628) ranks second, and Denso Ten, Kenwood and Panasonic (619) rank third in a tie.

The 2020 Japan Navigation Systems Customer Satisfaction Index Study—Aftermarket is based on responses from 1,920 vehicle owners who purchased an aftermarket navigation system from April 2018 through March 2020. The study was conducted via internet and was fielded in July 2020. 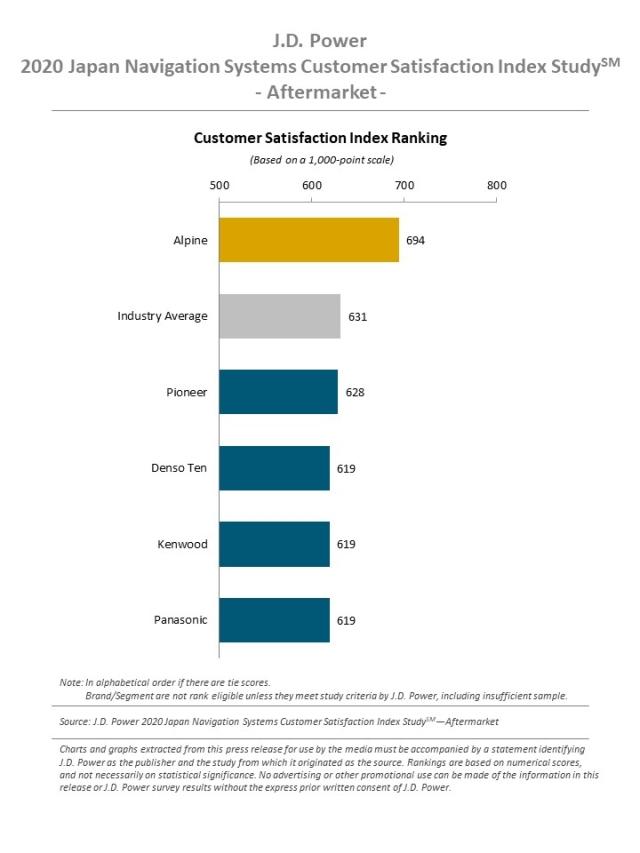