TOKYO: 2 Oct. 2020 — The satisfaction levels for factory- and dealer-installed navigation systems in new vehicles have increased overall since 2019; however, there is still room for improvement in the ease of use, according to the J.D. Power 2020 Japan Navigation Systems Customer Satisfaction Index StudySM—OEM, released today.

Now in its 13th year, the study measures satisfaction with factory- and dealer-installed navigation systems. Six factors comprised of 20 attributes are examined (listed in order of importance): navigation function (23%); display screen (19%); audio and video function (18%); ease of use (17%); design and texture (16%); and other functions, apps and services (7%). Satisfaction is calculated on a 1,000-point scale.

“Although overall satisfaction with navigation systems has steadily improved, users still indicate a relatively lower level of satisfaction with the ease of use,” said Hayato Iwakura, manager of the automotive division at J.D. Power Japan. “This suggests that manufacturers need to analyze the causes for low satisfaction in this area in order to find solutions. Also, as vehicle navigation systems are now more frequently equipped with connectivity, it will become critical for manufacturers to offer additional value and to develop more appealing products to differentiate themselves from their competitors as well as to distinguish their product from smartphones, which are also used to facilitate connectivity.”

Among the five brands in the luxury segment, Lexus ranks highest for a ninth consecutive year with a score of 702. Lexus achieves the highest scores in all six factors. Lexus is followed by BMW (642) and Audi (637).

Among the nine brands in the mass market segment, Toyota ranks highest for a third consecutive year with a score of 622. Toyota receives the highest scores in three factors: navigation function; other functions, apps and services; and ease of use. Toyota is followed by Nissan (619) and Subaru (609).

The 2020 Japan Navigation Systems Customer Satisfaction Index Study—OEM is based on responses from 974 luxury vehicle owners and 6,323 mass market vehicle owners who purchased a new vehicle equipped with a factory- or dealer-installed navigation system from April 2019 through March 2020. The study was fielded in July 2020. 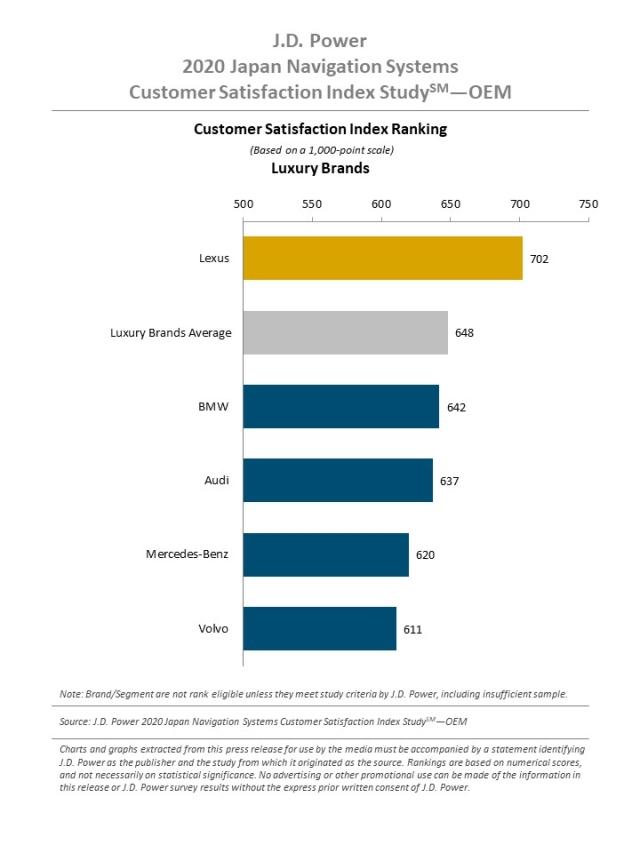 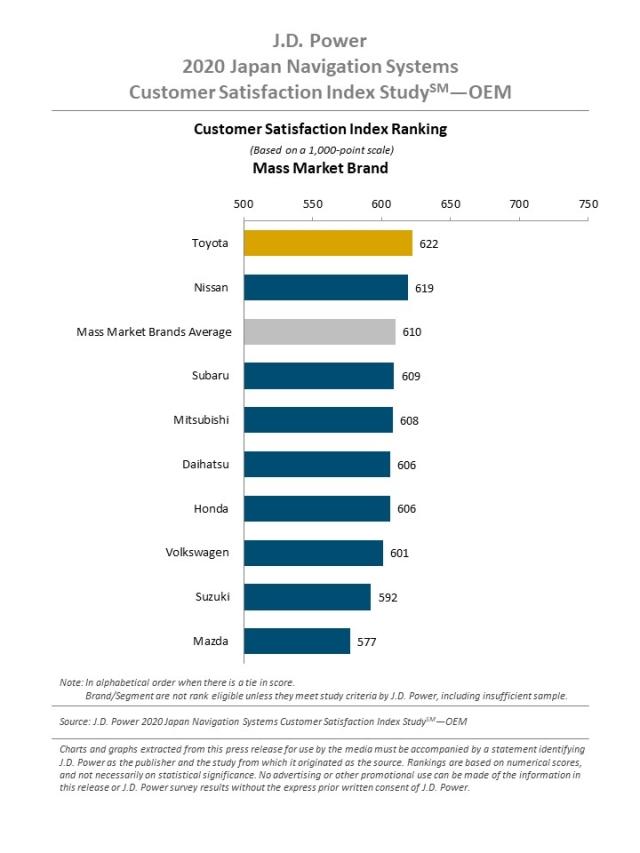