“Recently, more new vehicles equipped with advanced technologies and a wider variety of powertrains have influenced changes in owners’ perspectives when evaluating their new vehicle,” said Yuji Sasaki, director of research at J.D. Power. “In response to changes in the market, J.D. Power Japan has completely redesigned the study to redefine the appeal of new vehicles from the user’s perspective. The results of this year’s APEAL Study indicate that brand loyalty is enhanced if owners are highly satisfied with their new vehicle. The study also finds that three of the eight models, which rank highest in their respective segments in this study, also ranked highest in the company’s recently published 2021 Japan Initial Quality Study.”

The study, now in its 11th year, measures owners’ emotional attachment and level of excitement with their new vehicle across 37 attributes, ranging from the sense of comfort and luxury they feel when climbing into the driver’s seat to the feeling they get when they step on the accelerator. These attributes are aggregated to compute an overall APEAL Index score measured on a 1,000-point scale. The study complements the annual J.D. Power Japan Initial Quality StudySM (IQS) and the J.D. Power Japan Tech Experience Index (TXI) StudySM.

Following are key findings of the 2021 study:

The 2021Japan Automotive Performance, Execution and Layout (APEAL) Study is based on responses from 19,615 purchasers of new vehicles in the first two to 13 months of ownership.
The study, which complements the annual Japan Initial Quality Study (IQS) and the Japan Tech Experience Index (TXI) Study, is used extensively by manufacturers worldwide to help them design and develop more appealing vehicles, and is used by consumers to help them in their purchase decisions. The study was fielded from May through June 2021.

J.D. Power is a global leader in consumer insights, advisory services and data and analytics. A pioneer in the use of big data, artificial intelligence (AI) and algorithmic modeling capabilities to understand consumer behavior, J.D. Power has been delivering incisive industry intelligence on customer interactions with brands and products for more than 50 years. The world's leading businesses across major industries rely on J.D. Power to guide their customer-facing strategies.
J.D. Power has offices in North America, Europe and Asia Pacific. 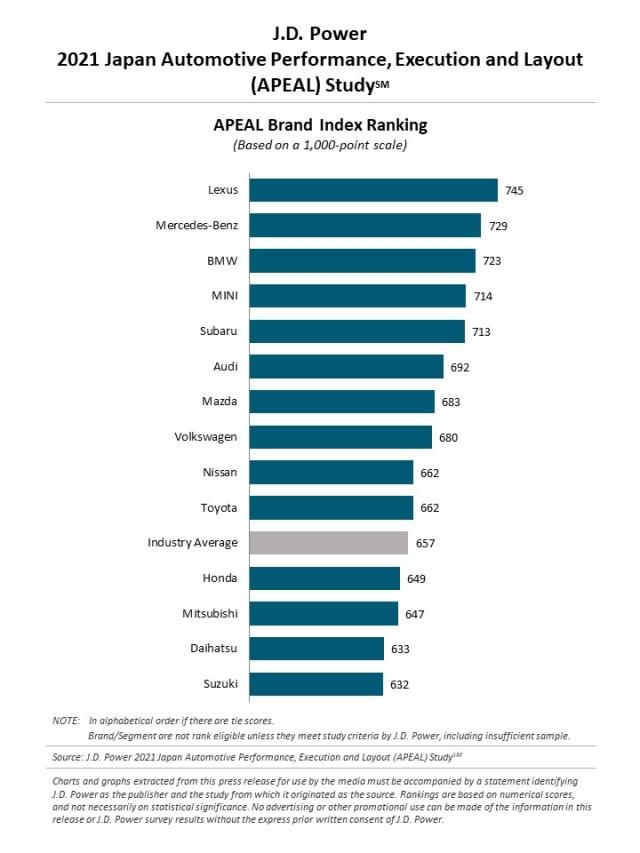 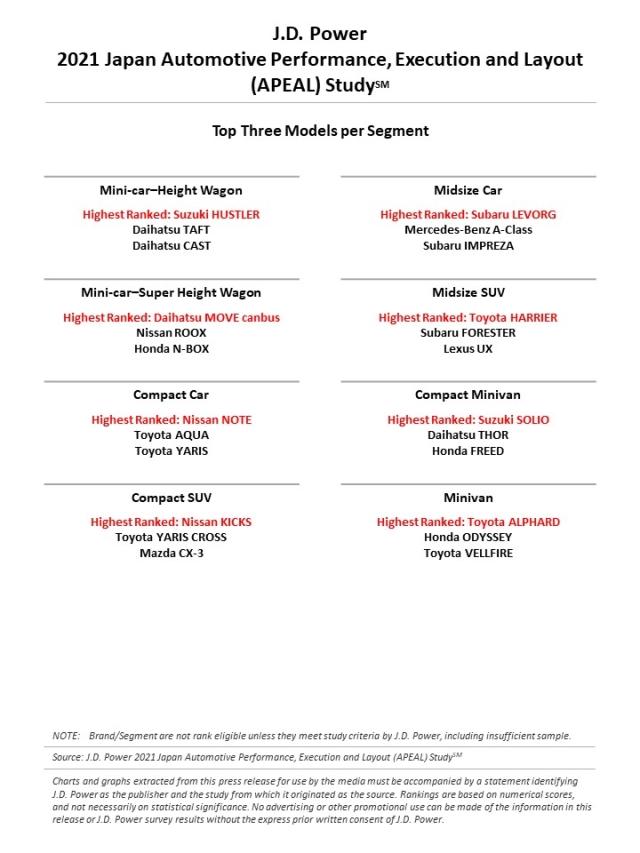