"While big banks have traditionally had an advantage over smaller banks in terms of convenience of branch locations and technology, their disadvantage was often in the personal service customers desired," said Jim Miller, senior director of banking at J.D. Power and Associates. "Many of the big banks have made great strides in listening to what their customers are asking for: reducing the number of problems customers encounter and, more importantly, improving satisfaction with fees. Consumers today are likely to find banks of all sizes offering the level of convenience, technology and personal service they have come to expect."

During the past several years, many banks have eliminated free checking and implemented new fees, which has often negatively impacted overall satisfaction. The study finds that as fees have begun to stabilize and banks have helped their customers better understand their fee structures, satisfaction in this area has begun to rebound, and is up by 14 points this year from 2012. One-third (33%) of customers say they "completely" understand their fee structure, compared with 26 percent in 2012. Fees also have been a major source of customer problems and complaints. The stability in fees, coupled with banks placing more emphasis on preventing problems, has lowered the proportion of customers experiencing a problem by 3 percentage points year over year, to 18 percent in 2013.

While customers appreciate the personal service they receive at their branch, such transactions are slowly declining, while the numbers of online, ATM and mobile banking transactions are increasing. This trend is especially pronounced in mobile banking, where usage has increased to 17 percent, up from 11 percent in 2012, and the average number of transactions per customer has increased to 51 per year, up from 29 in 2012. As banks roll out envelope-free ATM deposits and deposits by mobile phone, customers are finding it easier to handle routine transactions without needing to visit their branch.

"Successful banks are not pushing customers out of the branch, but rather providing tools that make it easier to conduct their banking business when and where it is convenient for them," said Miller. "Customers are quickly adopting mobile banking, making it a critical service channel for banks, not just a 'nice to have' option."

J.D. Power and Associates offers the following tips for consumers to keep in mind when shopping for a new bank:

The study measures satisfaction among banks in 11 regions. Study results by region are:

California Region: Rabobank ranks highest in the California region with a score of 825, and performs particularly well in the product offerings, facility, account information, fees and channel activities factors. California Bank & Trust (792) and U.S. Bank (780) follow in the rankings.

Florida Region: TD Bank ranks highest in the Florida region with a score of 803, performing particularly well in the facility factor. Following TD Bank in the rankings are Regions Bank (796) and Chase and PNC Bank in a tie (794 each).

Midwest Region: Chase ranks highest in the region with a score of 799, and performs particularly well in the product offerings, facility and account information factors. Bank Mutual (793) and Regions Bank (790) follow in the rankings.

New England Region: Bangor Savings Bank ranks highest in the region with a score of 831, and performs particularly well in the product offerings, fees, and channel activities. Eastern Bank (818) and Rockland Trust Co. (814) follow in the rankings.

North Central Region: With a score of 814, Huntington National Bank ranks highest in the region, performing particularly well in the account information, fees and channel activities factors. Following in the rankings are Flagstar Bank (807) and 1st Source Bank (802).

Northwest Region: Banner Bank ranks highest in the region with a score of 817, and performs particularly well in the account information, and fees. Umpqua Bank (815) and Columbia State Bank (799) follow in the rankings.

South Central Region: Arvest Bank ranks highest in the region with a score of 820, performing particularly well in the product offerings, facility, account information and channel activities factors. Following in the rankings are PNC Bank (802) and Trustmark National Bank (795).

Southeast Region: First Citizens Bancorp ranks highest in the region with a score of 836, and performs particularly well in the product offerings, fees and channel activities factors. United Community Bank (835) and First Citizens Bancshares (819) follow in the rankings.

Texas Region: Frost National Bank ranks highest in the Texas region with a score of 855, and performs particularly well in the product offerings, account activities, fees, account information and facility factors. Amegy Bank (814) and Chase (795) follow in the rankings.

The 2013 U.S. Retail Banking Satisfaction Study is based on responses from nearly 52,000 retail banking customers of more than 120 of the largest banks in the United States regarding their experiences with their retail bank. The study was fielded in January and February 2013.

About J.D. Power and Associates

About The McGraw-Hill Companies

No advertising or other promotional use can be made of the information in this release without the express prior written consent of J.D. Power and Associates. www.jdpower.com/corporate 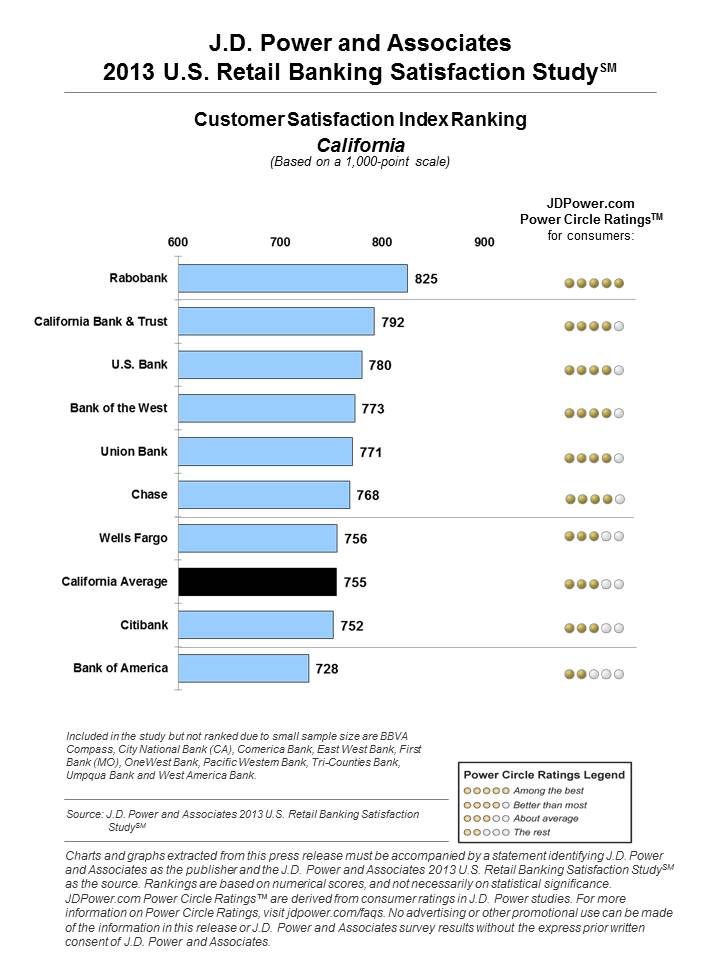 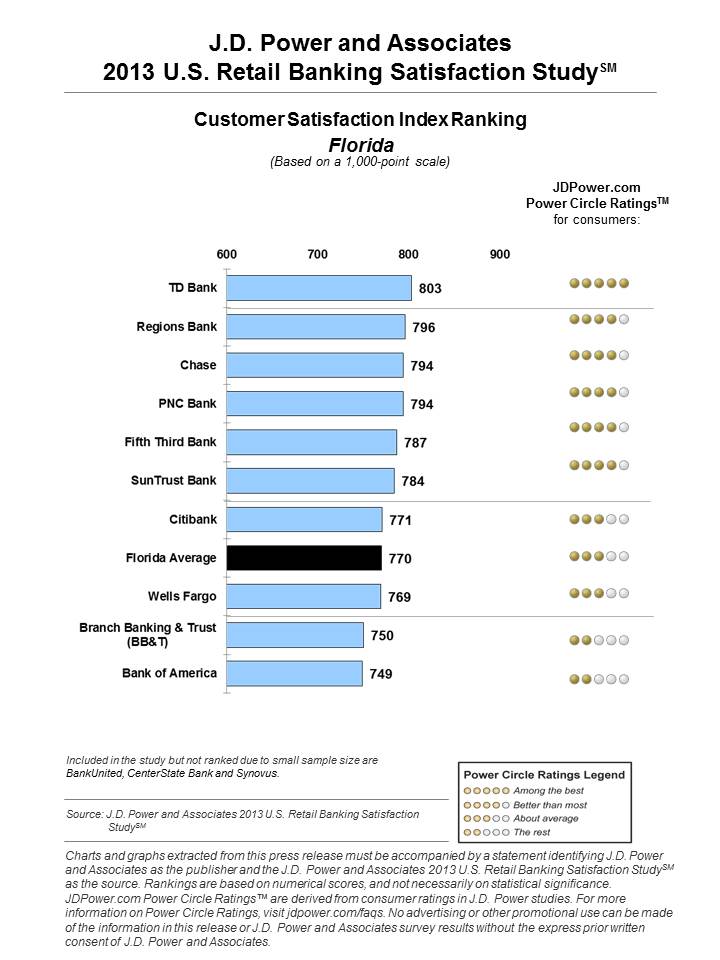 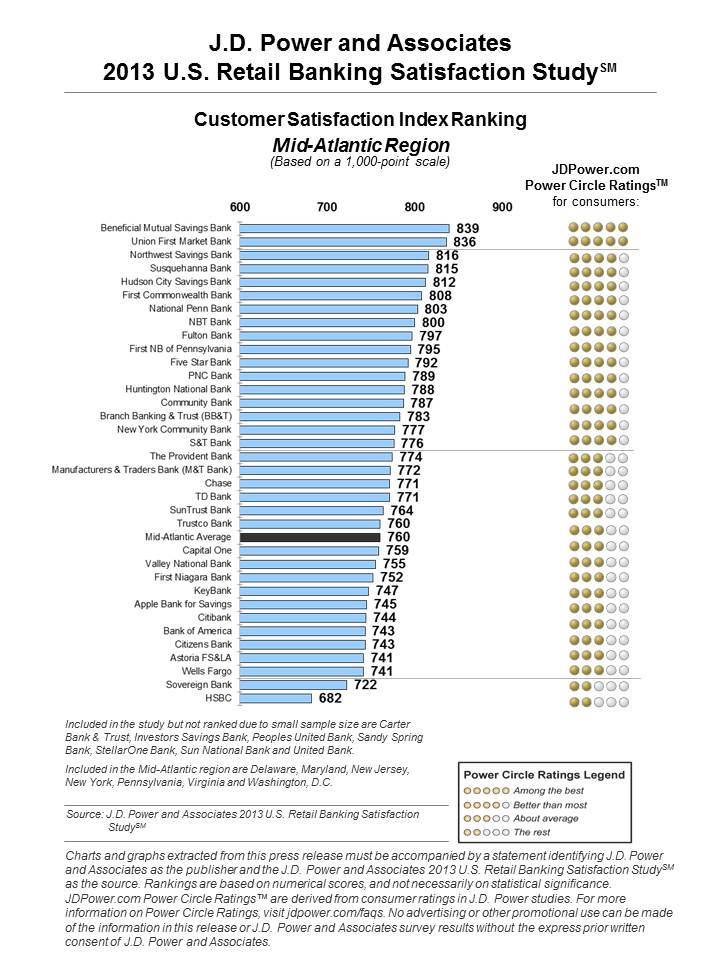 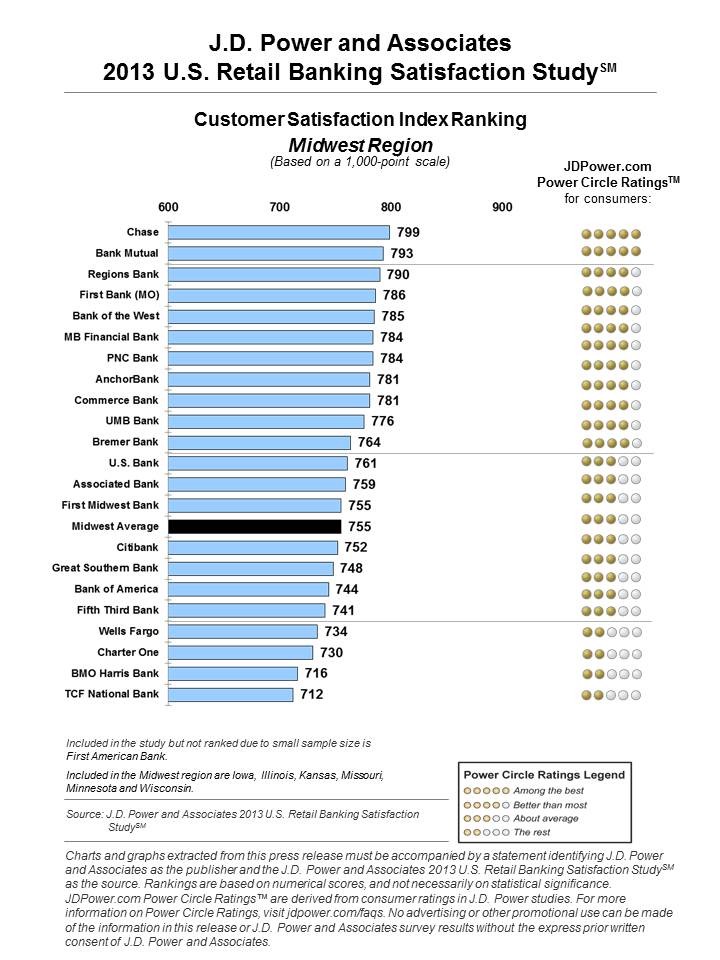 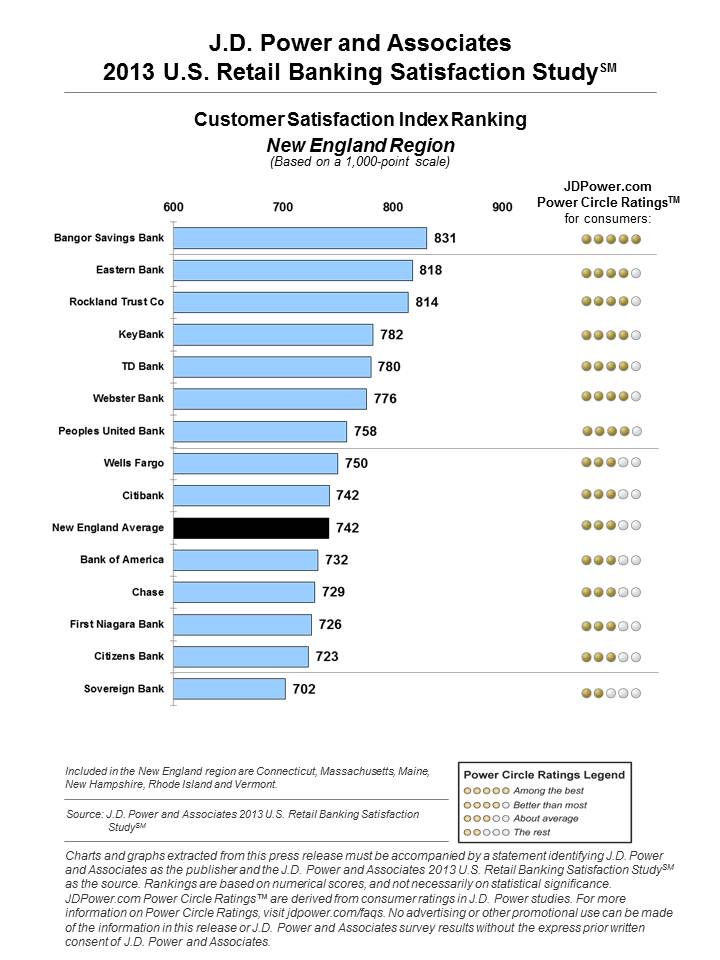 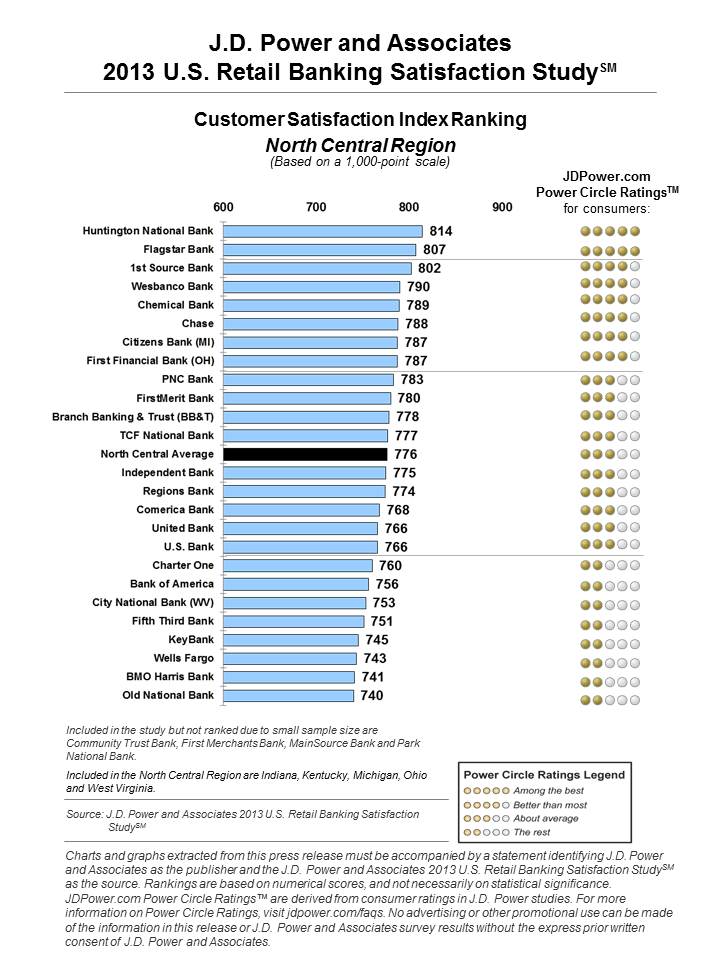 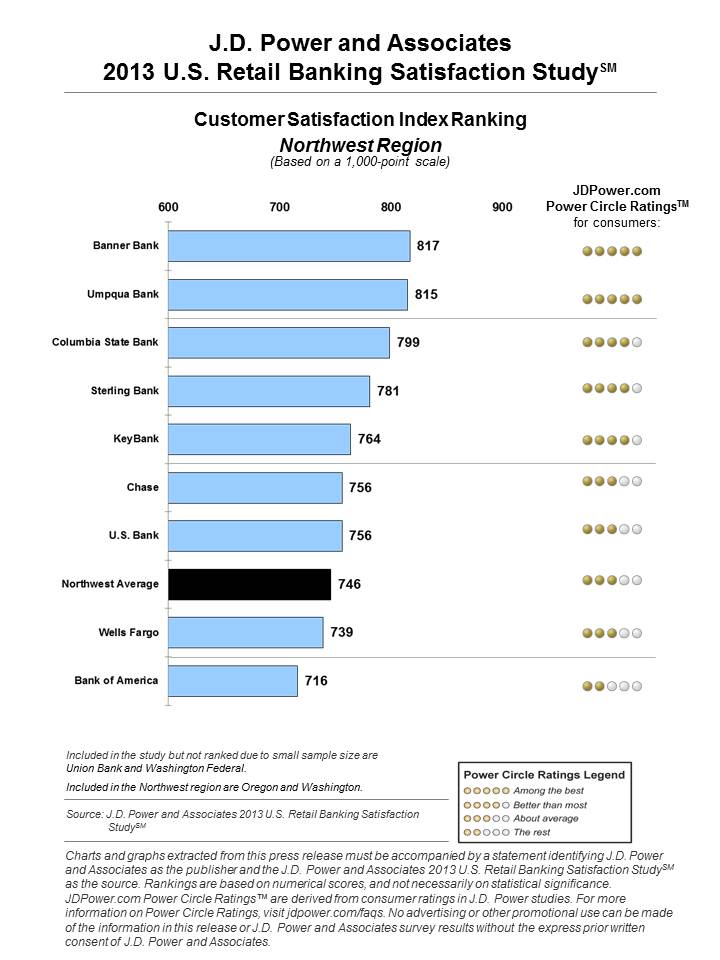 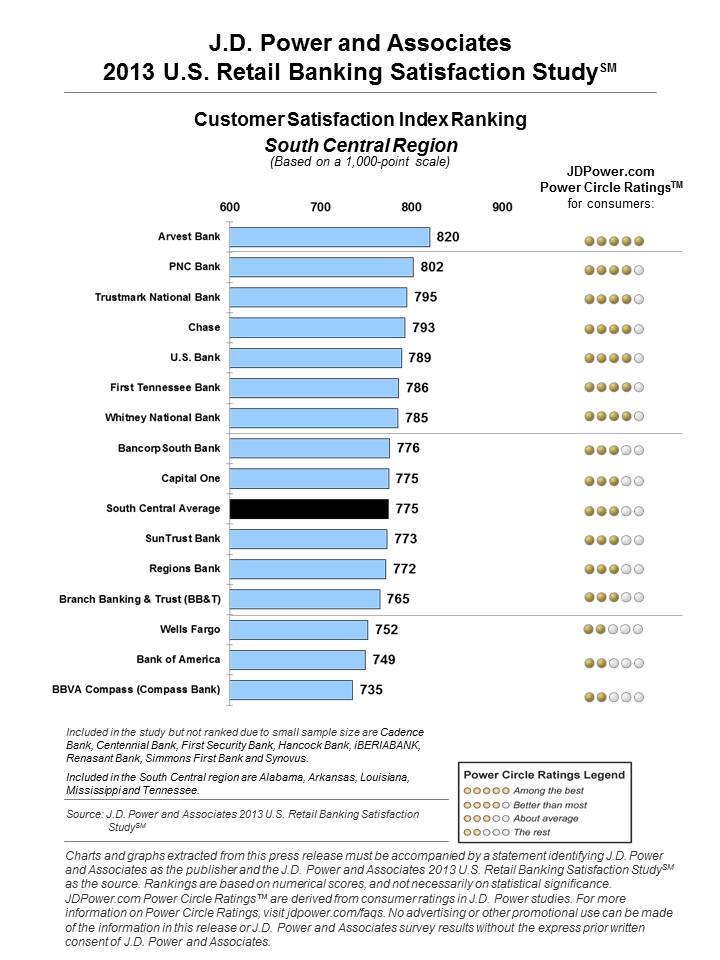 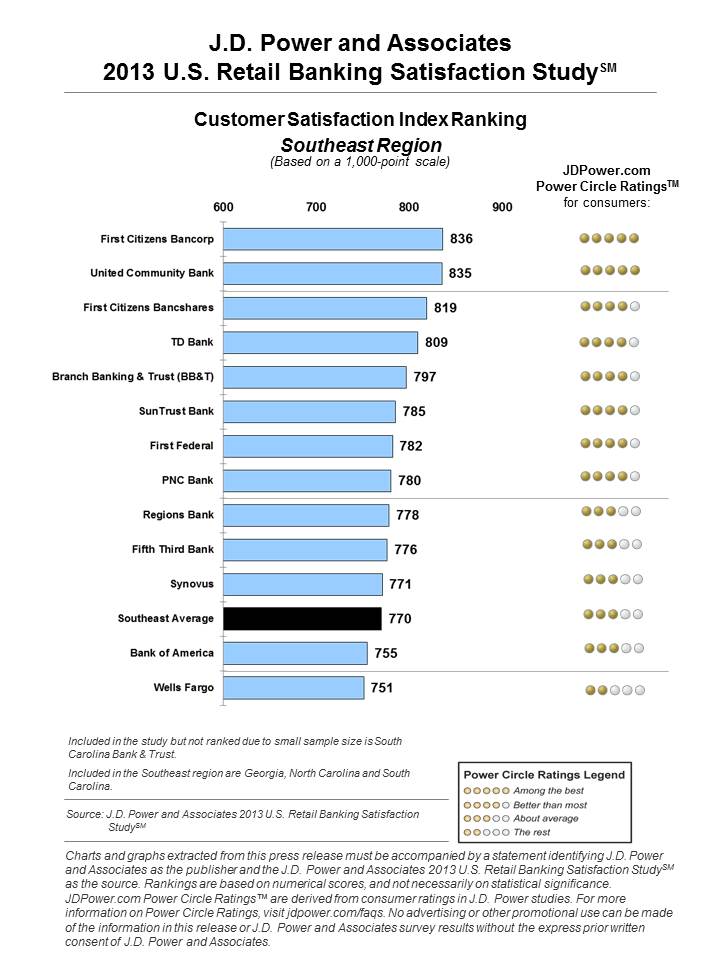 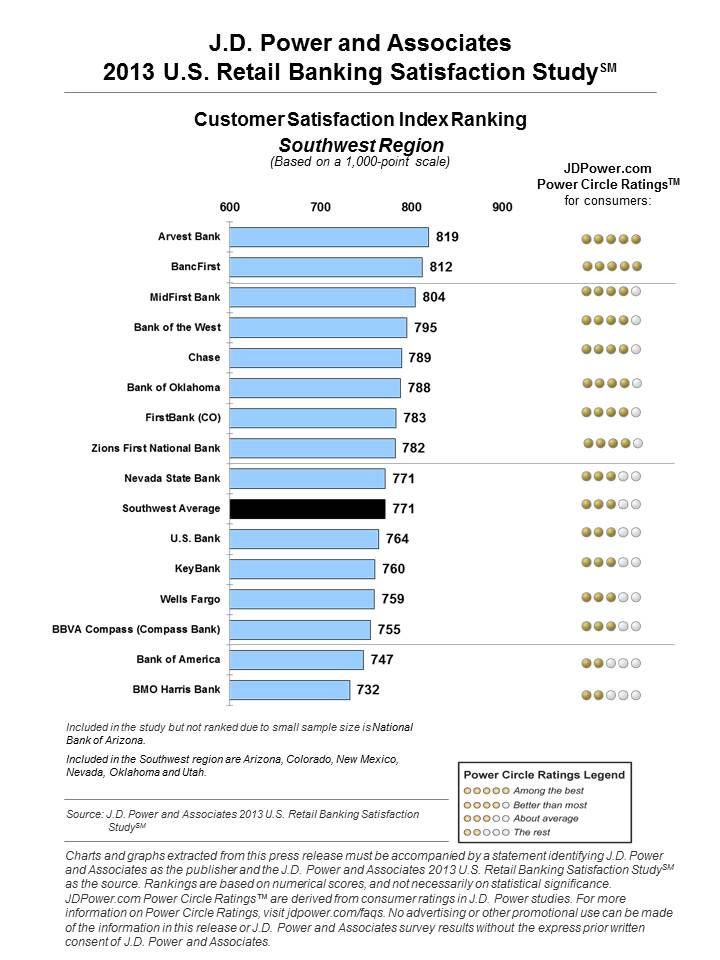 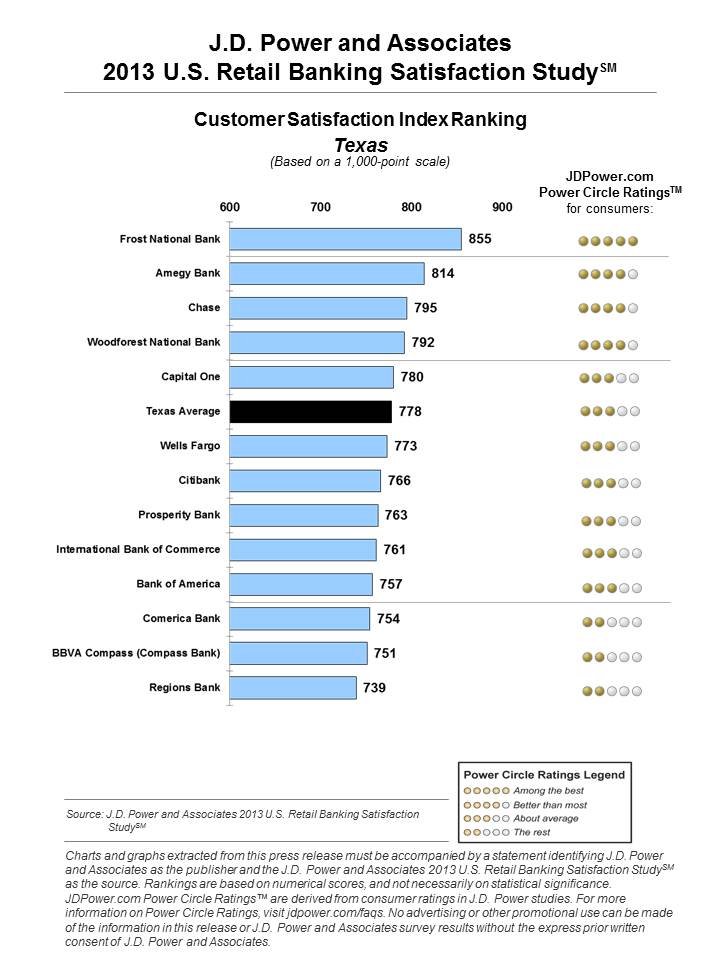