Lexus Ranks Highest among All Nameplates; Honda N-WGN, Mazda Demio, Audi A3 and Toyota Alphard Rank Highest in Their Respective Segments in New-Vehicle Appeal in Japan

TOKYO: 24 September 2015 ― While overall vehicle APEAL has improved, satisfaction with in-vehicle technology continues to be a trouble spot for the industry, especially with ACEN, according to the J.D. Power Asia Pacific 2015 Japan Automotive Performance, Execution and Layout (APEAL) StudySM released today.

The study, now in its fifth year, examines how gratifying a new vehicle is to own and drive. Owners evaluate their vehicle across 77 attributes, grouped into 10 categories of vehicle performance: exterior; interior; storage and space; audio/ communication/ entertainment/ navigation (ACEN); seats; heating, ventilation and air conditioning (HVAC); driving dynamics (driving performance); engine/ transmission; visibility and safety; and fuel economy. Satisfaction is calculated on a 1,000-point scale.

“While interior roominess, exterior styling and fuel economy have helped drive overall satisfaction with vehicle appeal, performance in the ACEN category remains unchanged from last year, even though a higher percentage of vehicles are equipped with this technology,” said Atsushi Kawahashi, senior director of the automotive division at J.D. Power Asia Pacific. “Manufacturers need to continuously improve this technology in order to offer customers more appealing vehicles. When customers are satisfied with the appeal of a vehicle, they are more likely to repurchase the same brand or recommend it to friends and family.”

Lexus ranks highest among nameplates, with an overall APEAL score of 748, followed by BMW with a score of 703 and Mercedes-Benz with 694.

The study is used extensively by manufacturers worldwide to help them design and develop more appealing vehicles and by consumers to help them in their purchase decisions. The 2015 Japan APEAL Study is based on responses from 18,649 purchasers of new vehicles in the first two to nine months of ownership. The study includes 16 automotive brands and 121 models and ranks models with a sample size of 100 or more usable returns. The study was fielded from May through June 2015.

[1] For a segment award to be issued, there must be at least three models with 67 percent of market sales in any given award segment. In the large segment, these criteria were not met, so no award has been presented. 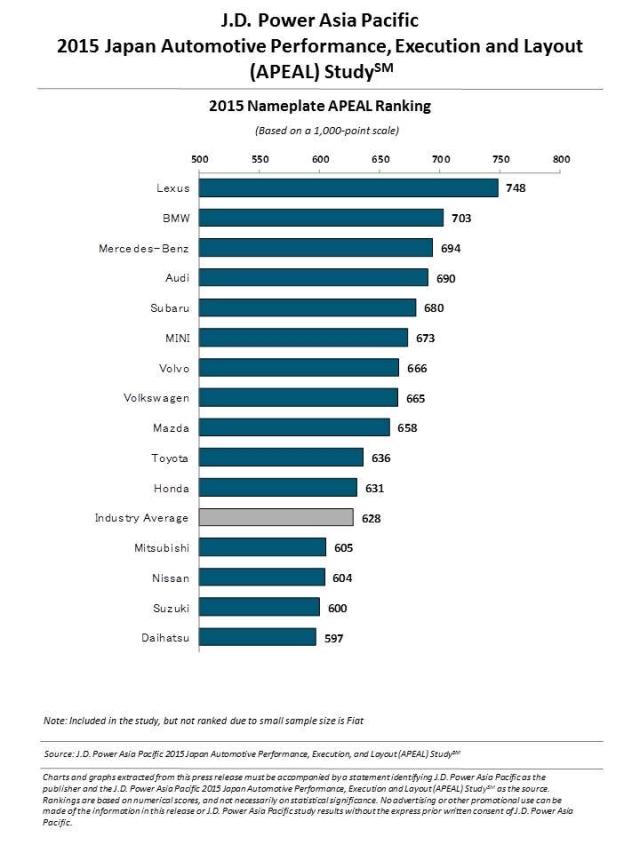 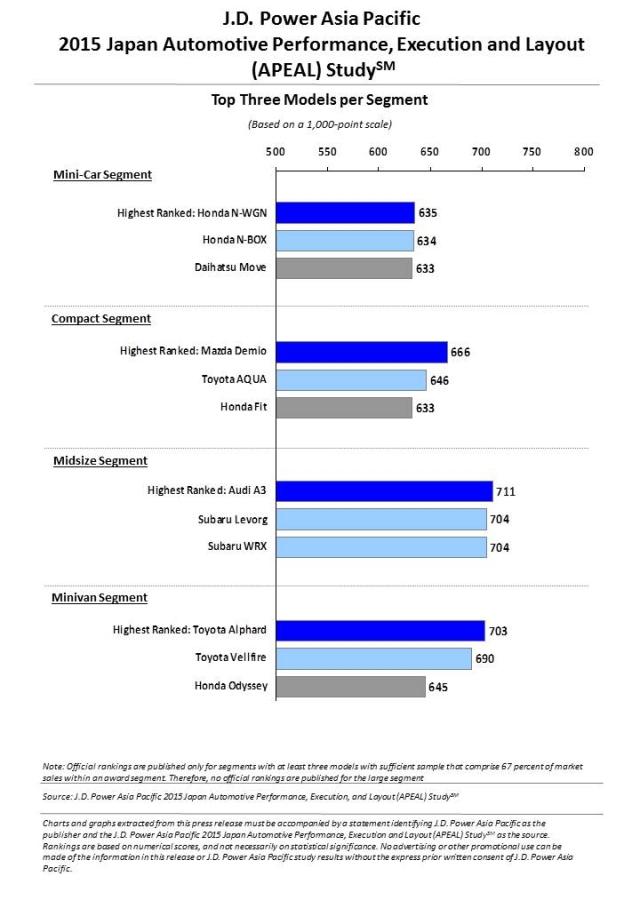