Tokyo: 19 October 2015 ― While a retail salesperson’s recommendation is the main reason customers select a replacement tire brand, satisfaction is significantly lower among customers who purchase the recommended brand than those who select their tires for other reasons, according to the J.D. Power 2015 Japan Replacement Tire Customer Satisfaction Index StudySM released today.

The study, now in its seventh year, measures vehicle-owner satisfaction with their newly replaced summer tires based on four factors: traction/ handling; ride; wearability; and appearance. Overall satisfaction scores (on a 1,000-point scale) are calculated for four vehicle segments based on owners' evaluations of 10 tire attributes. Overall satisfaction is 567 in 2015, compared with 566 in 2014.

“Tire retailers need to address the huge disconnect between their replacement tire brand recommendations and low customer satisfaction,” said Taku Kimoto, executive director of the automotive division at J.D. Power, Tokyo. “The retail salesperson has a unique opportunity to talk with the customer and add value to the shopping experience by providing important insights into tire quality, performance, fuel efficiency and wearability. Online tire websites don’t have the benefit of in-person dialogue.”

Kimoto noted that tire retailers can benefit from building their retail salesforce and developing effective sales training programs. “A knowledgeable salesperson can influence a customer’s tire purchase decision and, in turn, improve satisfaction with the brand,” said Kimoto.

The study finds a correlation between customer satisfaction and brand loyalty. Among highly satisfied customers (overall satisfaction scores of 800 or higher), 94 percent say they “definitely would” or “probably would” purchase the same brand for their next set of replacement tires, and 88 percent say they “definitely would” recommend their brand to others. Repurchase intention drops to 66 percent and recommendation intention drops to 44 percent among customers with low satisfaction (overall satisfaction scores of below 399 and below).

The overall satisfaction (OSAT) rankings in the four vehicle segments that are award-eligible are as follows:

Michelin (654) ranks highest in the large segment and performs particularly well in all four factors. Bridgestone and Pirelli rank second in a tie (627 each).

The 2015 Japan Replacement Tire Customer Satisfaction Index Study is based on responses from 7,979 vehicle owners within the first three to 14 months of ownership who purchased new replacement tires (excluding winter tires) between June 2014 and May 2015. The Internet study was fielded from late July through August 2015.

J.D. Power has offices in Tokyo, Singapore, Beijing, Shanghai and Bangkok that conduct customer satisfaction research and provide consulting services in the automotive, information technology and finance industries in the Asia Pacific region. Together, the five offices bring the language of customer satisfaction to consumers and businesses in Australia, China, India, Indonesia, Japan, Malaysia, Philippines, Taiwan, Thailand and Vietnam. Information regarding J.D. Power and its products can be accessed through the Internet at asean-oceania.jdpower.com. 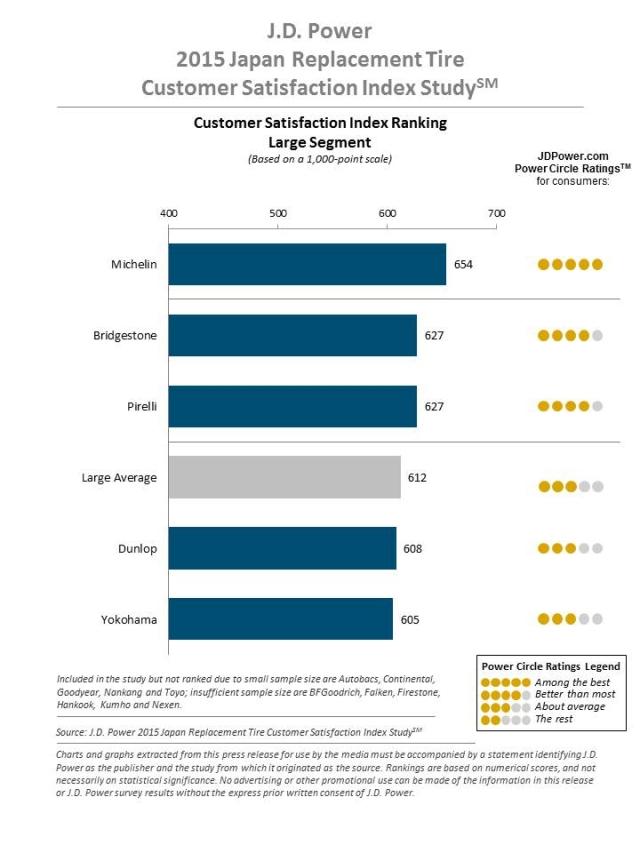 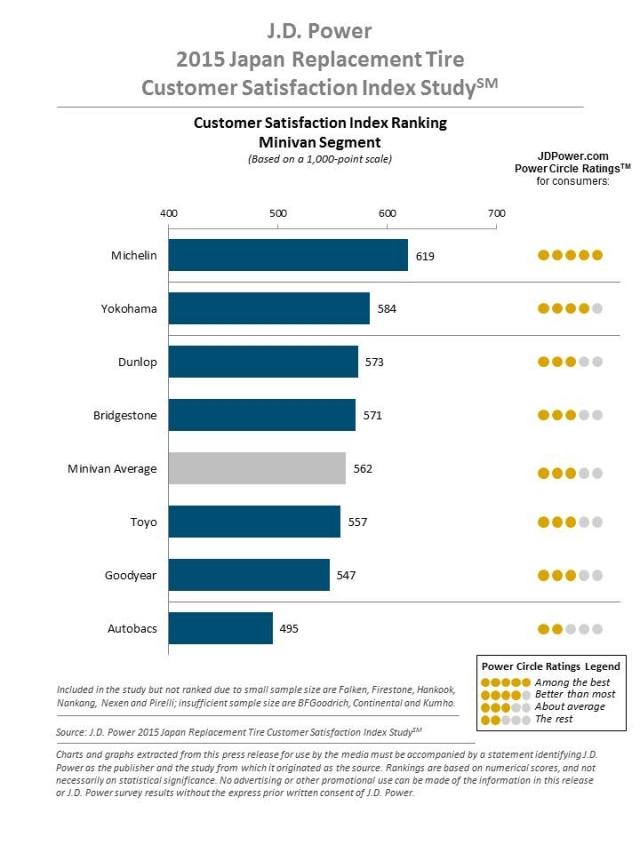