The study, now in its sixth year, examines how gratifying a new vehicle is to own and drive. Owners evaluate their vehicle across 77 attributes, grouped into 10 categories of vehicle performance: exterior; interior; storage and space; audio/ communication/ entertainment/ navigation (ACEN); seats; heating, ventilation and air conditioning (HVAC); driving dynamics (driving performance); engine/ transmission; visibility and safety; and fuel economy. Satisfaction is calculated on a 1,000-point scale.

The overall APEAL score averages 628 points in 2016, the same as in 2015. Among all categories, the largest improvement is in engine/ transmission, increasing by 5 points in 2016, followed by interior, ACEN, seats, HVAC and driving dynamics, each up by 4 points. However, satisfaction with fuel economy has decreased by a significant 12 points to 630.

The mini-car segment is the only segment to post a year-over-year decline in overall APEAL, dropping to 591 in 2016 from 603 in 2015. Satisfaction decreases across all categories, with the largest drop of 32 points in fuel economy. Storage and space declines by 16 points, while visibility and safety drops by 10 points.

The overall APEAL score remains at 619, the same as in 2015. Satisfaction with fuel economy decreases by 10 points, while satisfaction in the other categories increases or remains the same.

The overall APEAL score increases by 10 points year over year to 668. Satisfaction improves between 10 and 12 points in all categories except exterior, which is up by 5 points.

Overall APEAL increases by 7 points from 2015 to 716 this year. Satisfaction increases across all categories, with storage and space improving by 12 points and ACEN and HVAC each improving by 10 points.

Overall APEAL increases by 9 points year over year to 633. Satisfaction increases in all categories, with driving dynamics, engine/ transmission, interior, ACEN, seats and HVAC each up by at least 10 points.

The 2016 Japan APEAL Study is based on responses from 19,573 purchasers of new vehicles in the first two to nine months of ownership. The study includes 16 automotive brands and 134 models and ranks models with a sample size of 100 or more usable returns. The study was fielded from early June through late June 2016.

J.D. Power has offices in Tokyo, Singapore, Beijing, Shanghai, Malaysia and Bangkok that conduct customer satisfaction research and provide consulting services in the automotive, information technology and finance industries in the Asia Pacific region. Together, the six offices bring the language of customer satisfaction to consumers and businesses in Australia, China, India, Indonesia, Japan, Malaysia, Philippines, Taiwan, Thailand and Vietnam. Information regarding J.D. Power and its products can be accessed through the Internet at www.asean-oceania.jdpower.com. 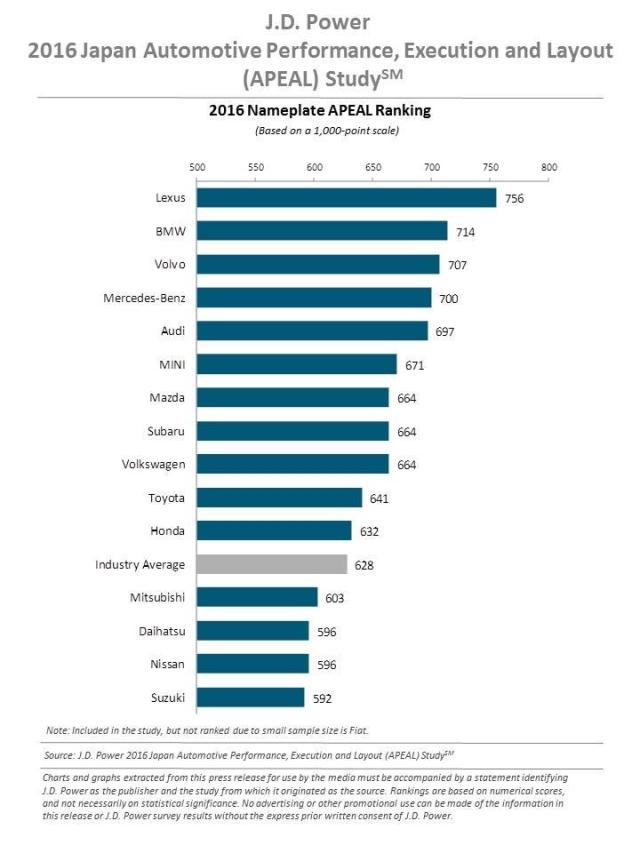 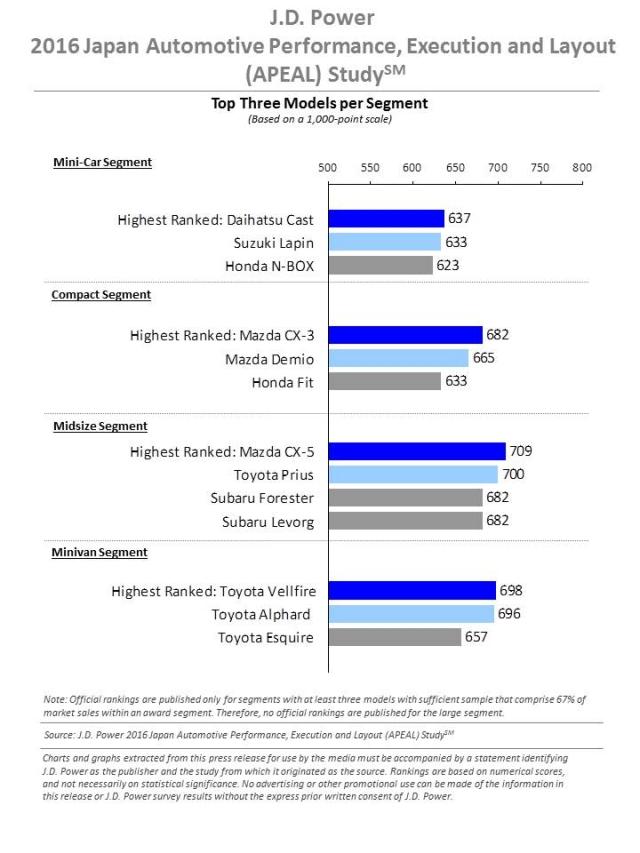