TOKYO: 20 Oct. 2016 — Vehicle dependability in Japan improves, as owners of 3- to 5-year-old cars report fewer problems with their vehicle than a year ago, according to the J.D. Power 2016 Japan Vehicle Dependability StudySM (VDS), released today.

Owners report an average of 64 PP100 in 2016, down from 72 PP100 in 2015. Dependability improves across all categories. While the vehicle exterior (13.2 PP100) and vehicle interior (10.9 PP100) categories have the greatest year-over-year decline in problems, these two remain the most problematic areas. The third-most frequently reported problems are in engine/ transmission (10.1 PP100). Together, these three categories account for 53% of all problems reported in the study.

The most frequently reported problem symptoms are unpleasant odors from the air vents, noisy brakes and windows fogging up.

“It is encouraging to see owners report fewer problems overall, as automakers continue to focus on improving the overall quality and dependability of their vehicles,” said Atsushi Kawahashi, senior director of the Japan automotive practice at J.D. Power.

However, dependability is not improving in all areas of the vehicle. Owners are reporting more problems related to the engine idling, excessive fan/ blower noise and Bluetooth pairing/ connectivity in 2016, compared with 2015. The study finds that more vehicles are equipped with the engine idle stop feature (+19%) and the Bluetooth feature (+4%) this year, compared with 2015.

“The increase in technology-related problems is likely due to the increase in the penetration of these features,” said Kawahashi. “Still, it is critical that automakers identify and correct these types of problems now to improve quality, increase customer satisfaction and build consumer trust in the technologies, which will continue to increase in vehicles in Japan. We are already seeing a dramatic increase in the number of vehicles equipped with engine idling and Bluetooth technologies.”

The study finds that vehicle dependability affects customer loyalty and advocacy. Among owners who do not experience any problems with their vehicle, 71% say they “definitely would” or “probably would” repurchase the same brand and 73% say they “definitely would” or “probably would” recommend the model to family and friends. Among owners who experience three or more problems with their vehicle, only 56% intend to repurchase the brand and 61% expect to recommend their model to others.

Toyota has three models that rank highest in their respective segments: Corolla, Ractis and Sienta. The Honda Fit Shuttle ranks highest in its segment, as does the Suzuki Lapin.

Following are other key findings of the study:

The 2016 Japan Vehicle Dependability Study is based on responses from 18,777 purchasers of new vehicles in the first 37 to 54 months of ownership. The study, which includes 17 automotive brands and 120 models, ranks models with a sample size of 100 or more usable questionnaire returns. The study was fielded in July 2016. 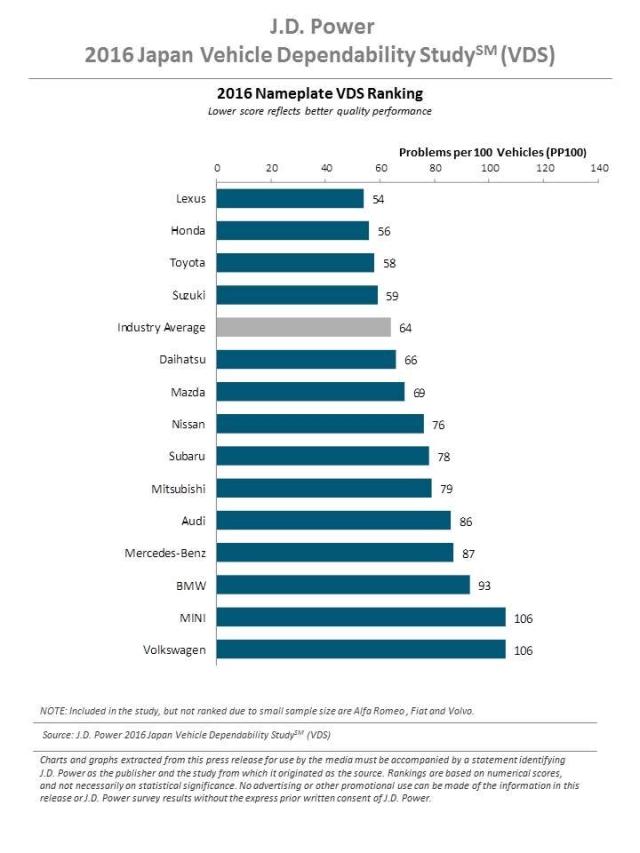 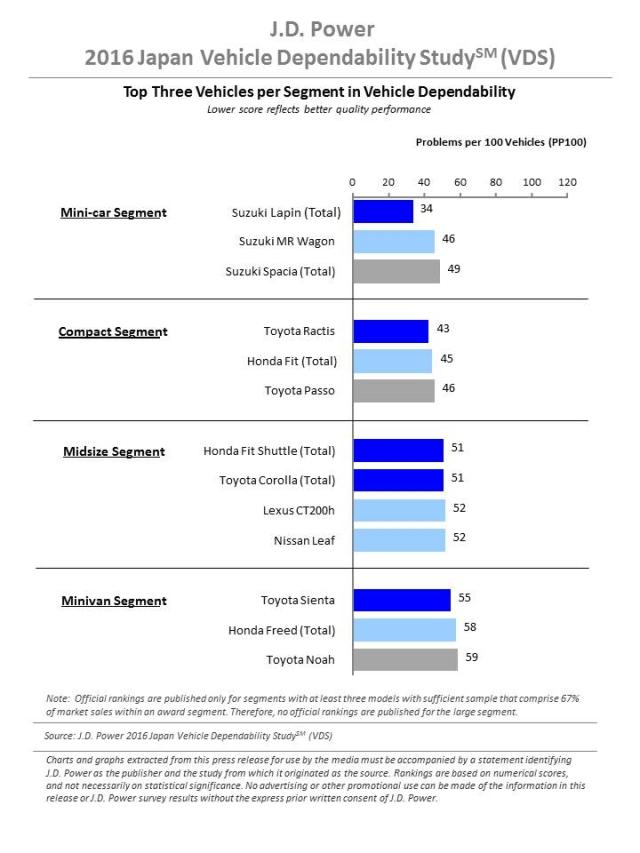