While Problems Have Improved Overall, The Number of Problems Related to New Technology Has Increased

Tokyo: 27 August 2015 ― Overall, the number of customer-reported problems has decreased from 2014; however, the number of problems related to new technology, such as navigation systems, voice recognition and Bluetooth, has increased, according to the J.D. Power Asia Pacific 2015 Japan Initial Quality StudySM (IQS) released today.

J.D. Power’s initial quality studies are conducted globally and serve as the industry benchmark for new-vehicle quality. The Japan IQS, now in its fifth year, was redesigned in 2014 to more effectively measure problems related to technologies and features being offered.

The study finds that more than 80 percent of vehicles are equipped with a navigation system (up 3% from 2014); 60 percent have Bluetooth connectivity (up 8% from 2014); and 31 percent have voice recognition (up 6% from 2014). The growing percentage of vehicles with such features has an influence on the increase in the number of ACEN problems reported.

“While there has been an overall improvement in quality for most categories in the study, ACEN is a challenge for vehicle manufacturers, as it is the category with the second-highest number of reported problems this year, following vehicle interior,” said Atsushi Kawahashi, senior director of the automotive division at J.D. Power Asia Pacific. “As the adoption of smartphone and other media device systems increases in Japan, it is very important for automakers to understand users’ needs to help them improve customer satisfaction with ACEN systems. As preventative accident/safety systems gain importance, automakers will need to improve satisfaction with the features/controls/displays related to these systems. By improving the quality of these technologies and the user experience, vehicle manufacturers are more likely to increase customer satisfaction and brand loyalty.”

Overall initial quality averages 83 PP100, an improvement of 3 PP100 from 2014. This improvement is driven by the engine/ transmission (-3.4 PP100), driving experience (-2.4) and seats (-2.3) categories, which cumulatively equates to 8.1 PP100 fewer problems. Despite the improvement in those three categories, more problems are reported in the other categories year over year, which has resulted in an overall improvement of only 3 PP100.

Overall initial quality averages 88 PP100, an improvement of 6 PP100 from 2014. This improvement is driven by vehicle interior (-2.7 PP100), seats (-2.5) and features/controls/ displays (-2.4). However, the number of problems reported in the other categories—including vehicle exterior—has increased by 0.5 PP100 in each category.

Rankings in the four vehicle segments are:

The 2015 Japan Initial Quality Study is based on responses from 18,649 purchasers of new vehicles in the first two to nine months of ownership. The study, which includes 16 automotive brands and 121 models, ranks models with a sample size of 100 or more usable questionnaire returns. The study was fielded May through June 2015.

technology and finance industries. Together, the five offices bring the language of customer satisfaction to consumers and businesses in Australia, China, India, Indonesia, Japan, Malaysia, Philippines, Taiwan, Thailand and Vietnam. Information regarding J.D. Power Asia Pacific and its products can be accessed through the Internet at japan.jdpower.com.

[1] No official rankings are published due to an insufficient number of models. 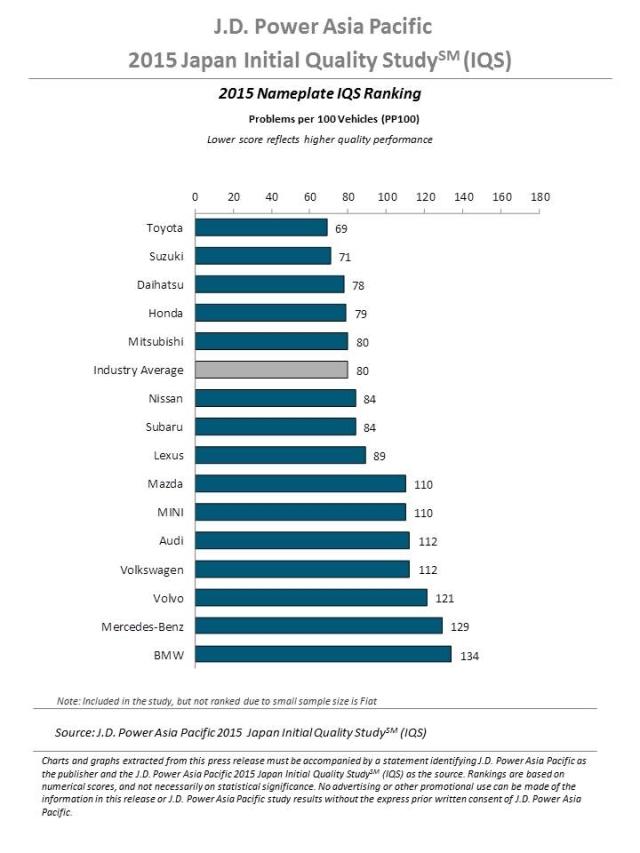 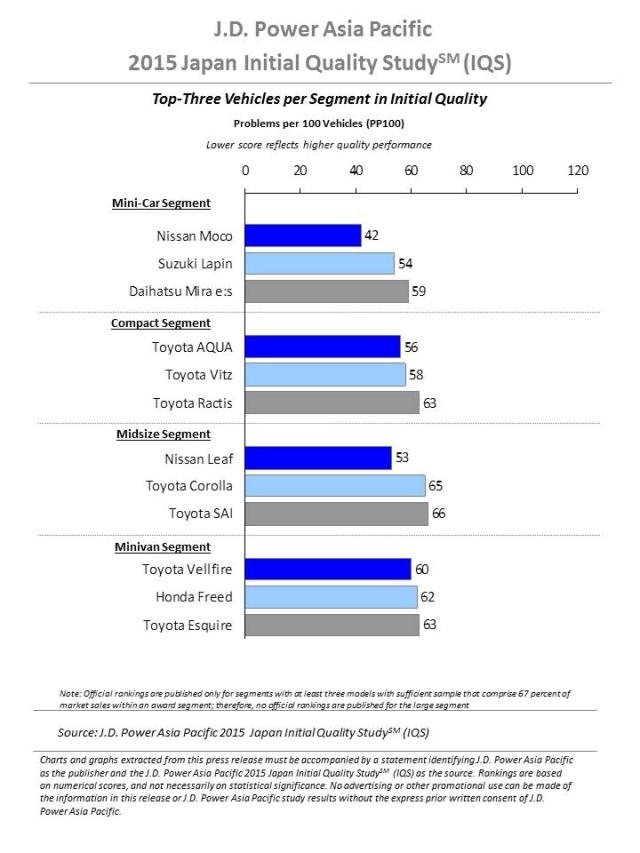