Overall Vehicle Appeal Remains the Same Level as in 2017, While Satisfaction with Fuel Economy Decreases

TOKYO: 20 Sept. 2018 — While overall new-vehicle appeal in Japan remains the same as in 2017, according to the J.D. Power 2018 Japan Automotive Performance, Execution and Layout (APEAL) StudySM released today, APEAL scores for motor-driven vehicles such as plug-in hybrids and electrical vehicles have increased, compared to scores for fuel-powered vehicles.

The study finds that “electric powertrain vehicles[1]” have a greater appeal for new-vehicle owners than do “internal combustion engine (ICE) vehicles” such as gasoline or diesel-fueled vehicles and hybrids.

“As the domestic sales share of electric powertrain vehicles has grown, more customers have purchased such a vehicle as a replacement, i.e., from a hybrid to a plug-in hybrid.” said Atsushi Kawahashi, Senior Director of the Automotive Division at J.D. Power, Tokyo. “For such users, it is more difficult for them to perceive the good fuel economy of the electric powertrain vehicles, an advantage of those vehicles, than for owners who used a gasoline- or diesel-fueled vehicle. It will become more important for manufacturers to show consumers types of new-vehicle appeal other than fuel efficiency in order to differentiate their vehicles from those of their competitors.”

By vehicle segment, the overall APEAL scores have increased since 2017 in the mini-car and large segments, by 5 points and 1 point, respectively. In the mini-car segment, the largest improvement is in engine/ transmission, increasing by 10 points to 593, while visibility and safety in the large segment has increased by 7 points to 719. However, the overall APEAL scores have decreased by 5 points in the midsize segment and by 1 point in the minivan segment as you will see detailed below.

Toyota Alphard ranks highest in the minivan segment, followed by Toyota Vellfire in second place and

The 2018 Japan APEAL Study is based on responses from 22,387 purchasers of new vehicles in the first

two to nine months of ownership. The study was fielded from May through June 2018. The study, now in its eighth year, examines how gratifying a new vehicle is to own and drive. Owners evaluate their new vehicle across 77 attributes, grouped into 10 categories of vehicle performance: exterior; interior; storage and space; audio/ communication/ entertainment/ navigation (ACEN); seats; heating, ventilation and air conditioning (HVAC); driving dynamics (driving performance); engine/ transmission; visibility and safety; and fuel economy. 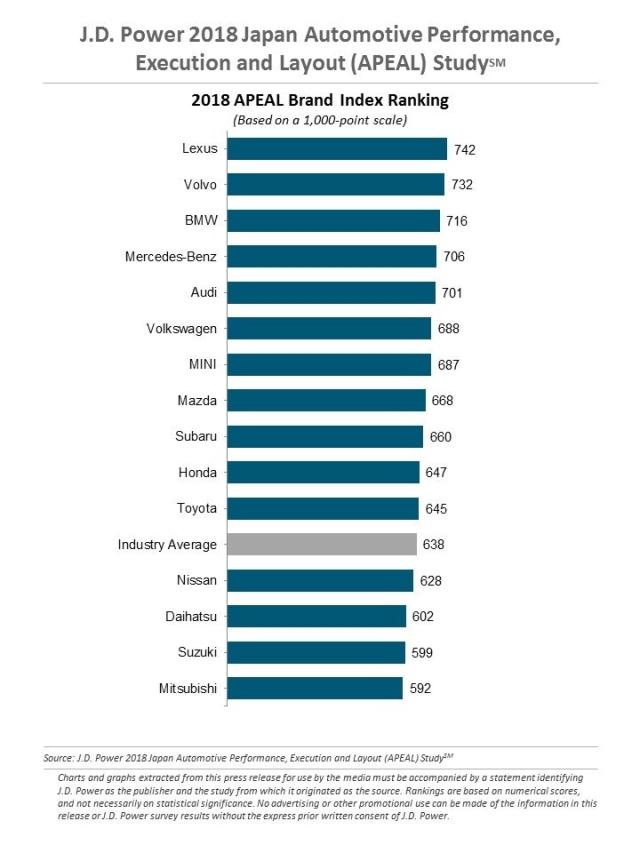 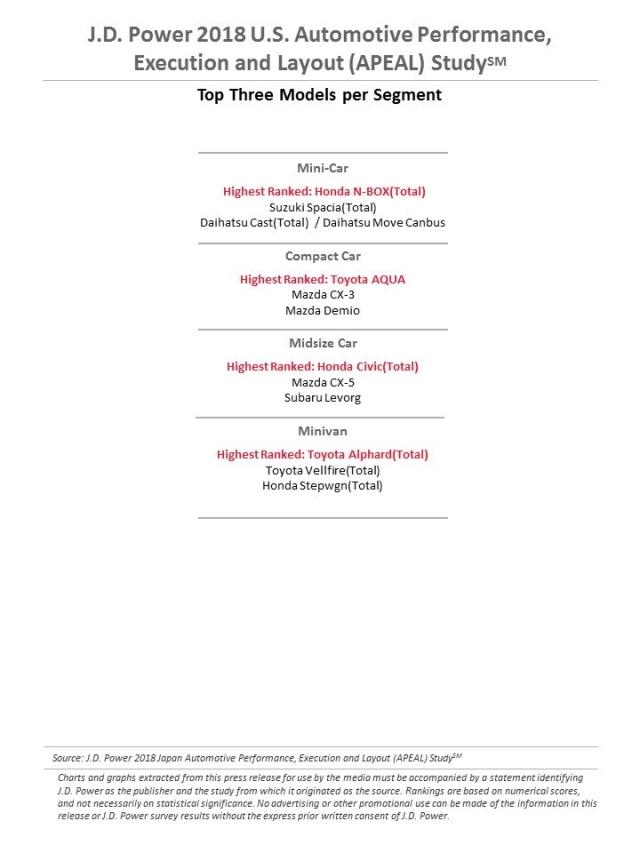