Lexus Ranks Highest among All Brands

TOKYO: 25 Oct. 2018 — Overall, the number of reported problems is almost the same as in 2017, according to the J.D. Power 2018 Japan Vehicle Dependability StudySM (VDS), released today.

The VDS is conducted globally and serves as the industry benchmark for vehicle dependability. The Japan study, now in its fourth year, measures problems experienced during the past 12 months by original owners of vehicles after 37 to 54 months of ownership. The study examines 177 problem symptoms across eight categories: vehicle exterior; driving experience; features/ controls/ displays (FCD); audio/ communication/ entertainment/ navigation (ACEN); seats; heating, ventilation and air conditioning (HVAC); vehicle interior; and engine/ transmission. Overall dependability is determined by the number of problems reported per 100 vehicles (PP100), with a lower score reflecting higher quality. The overall industry average increases by 1 PP100 to 75 PP100 and remains at the same level as in 2017.

“Higher repurchase intent is seen for Lexus and Toyota, which rank highest and second highest among all brands, where 88% and 85%, respectively, say that they ‘definitely would’ or ‘probably would’ repurchase the same brand,” said Atsushi Kawahashi, Senior Director of the Automotive Division at J.D. Power, Tokyo. “This indicates that there is a correlation between experience of problems and repurchase intent. Auto manufacturers need to work on further improvement in durability to increase owners’ brand loyalty, as customers are keeping their vehicles for longer periods of time.”

Following are some of the key findings of the study:

Toyota Vitz ranks highest in the compact segment with a score of 52 PP100, followed by Toyota Ractis (54 PP100) in second place and Toyota AQUA (56 PP100) in third place.

Toyota SAI ranks highest in the midsize segment with a score of 38 PP100, followed by Toyota Corolla (50 PP100) in second place and Nissan Leaf (66 PP100) in third place.

Toyota Esquire ranks highest in the minivan segment with a score of 45 PP100, followed by Toyota WISH (61 PP100) in second place and Toyota Noah (64 PP100) in third place.

* The overall industry average for vehicle dependability is 75 PP100.

* Models in the large segment are not included in the rankings due to insufficient market shares.

The 2018 Japan Vehicle Dependability Study is based on responses from 20,835 purchasers of new vehicles in the first 37 to 54 months of ownership and includes 16 automotive brands and 116 models. The study was conducted via Internet from June through July 2018. 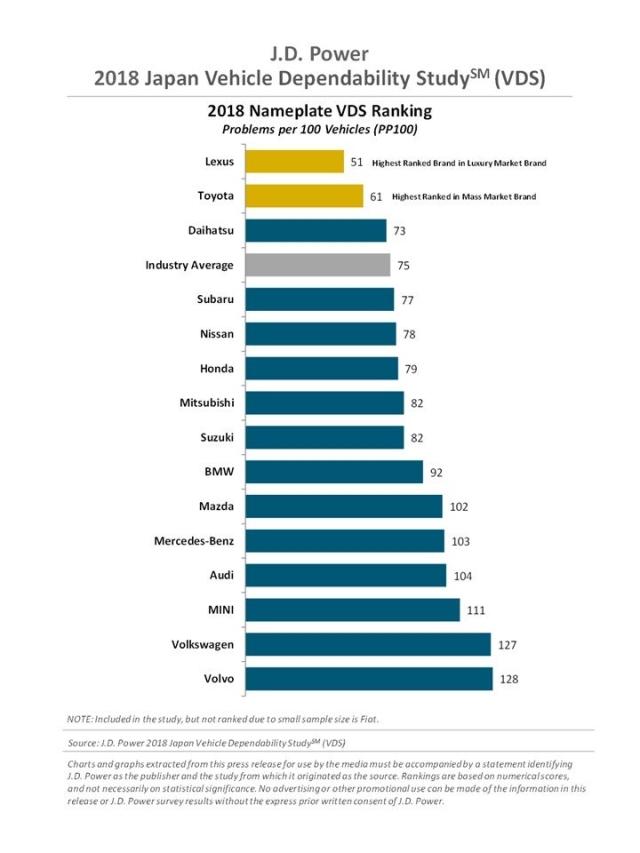 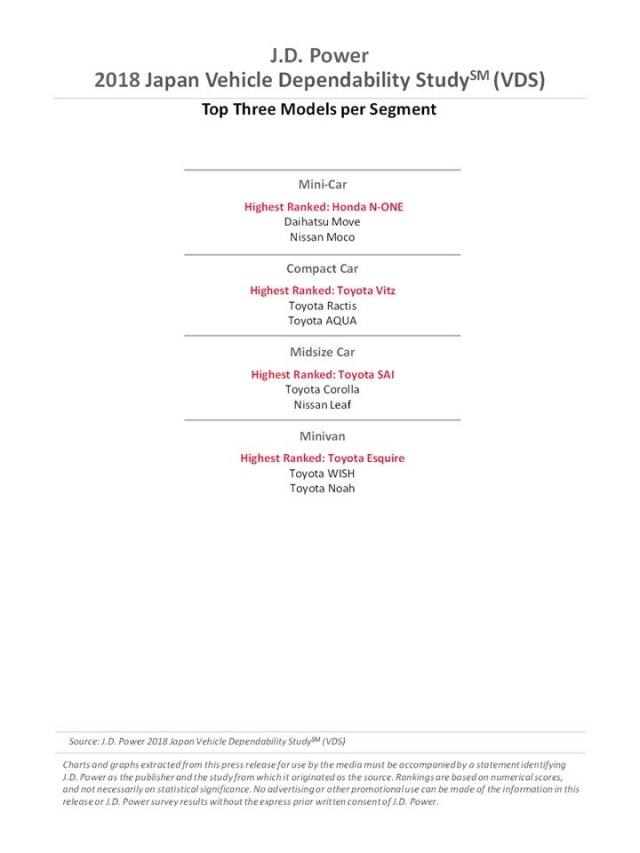