Now in its 12th year, the study measures customer satisfaction with aftermarket in-dash vehicle navigation systems. Six factors comprised of multiple attributes are examined (listed in order of importance): navigation function (27%); audio and video function (19%); display screen (18%); design and texture (17%); ease of use (14%); and other functions, apps and services (5%). Satisfaction is calculated on a 1,000-point scale.

“Overall customer satisfaction with aftermarket navigation systems has increased since last year. We specifically see an increase in satisfaction in the display screen because of an enlarged screen and improved visibility, which were originally and creatively developed by manufacturers,” said Atsushi Kawahashi, Senior Director of the Automotive Division at J.D. Power. “In addition, satisfaction has also increased in the user-friendliness of Apple CarPlay, the improvement of the user interface, including voice recognition, and the accuracy of vehicle location.”

Following are some key findings of the 2019 study:

Alpine ranks highest for the eighth consecutive year, with a score of 694. Alpine achieves the highest scores in all six factors. Pioneer (625) ranks second and Panasonic (613) ranks third.

The 2019 Japan Navigation Systems Customer Satisfaction Index Study—Aftermarket is based on responses from 2,104 vehicle owners who purchased an aftermarket navigation system from April 2017 through March 2019. The study was conducted via internet and was fielded in July 2019. 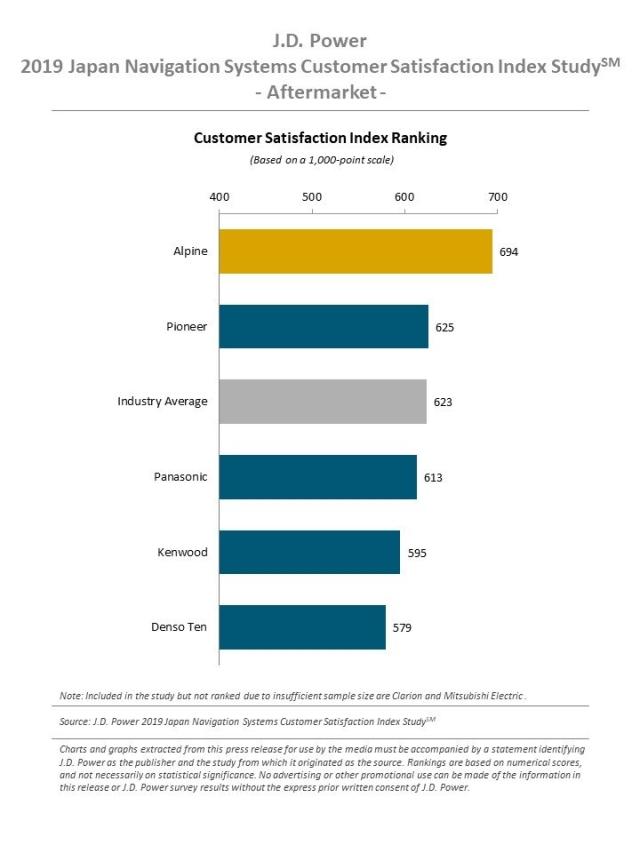