Lexus and Toyota Again Rank Highest in Their Respective Segments

TOKYO: 3 Oct. 2019 — Overall satisfaction with factory- and dealer-installed navigation systems has increased to 600 (on a 1,000-point scale), up 26 points from 2018, according to the J.D. Power 2019 Japan Navigation Systems Customer Satisfaction Index StudySM—OEM, released today.

Now in its 12th year, the study measures satisfaction with factory- and dealer-installed navigation systems. Six factors comprised of 20 attributes are examined (listed in order of importance): navigation function (23%); display screen (19%); audio and video function (18%); ease of use (17%); design and texture (16%); and other functions, apps and services (7%). Satisfaction is calculated on a 1,000-point scale.

“Overall satisfaction has increased considerably in the industry, particularly in display screen and design and texture,” said Atsushi Kawahashi, Senior Director of the Automotive Division at J.D. Power. “These improvements are driven by manufacturers’ efforts to increase the appeal of new vehicles from a customer’s viewpoint and to improve new-vehicle quality. In recent years, the roles and functions of navigation systems have expanded. New vehicles are more often equipped with communication systems following the CASE[1] trends, becoming connected cars.”

The study finds that, in the luxury segment, larger improvements are seen in the imported brands, indicating the convenience of services and functions installed on connected cars, a focus of the foreign manufacturers, has been increasingly accepted in the Japanese market. On the other hand, satisfaction has increased in navigation function as well as audio and video function for the domestic brands in both the luxury and the mass market segments, suggesting that the convenience of frequently used functions has increased.

“Factory- and dealer-installed navigation systems will evolve to become essentials and lead the CASE trends in the passenger-car market in Japan,” Kawahashi added.

Following are some key findings of the 2019 study:

Among the four brands in the luxury segment, Lexus ranks highest for the eighth consecutive year with a score of 697. Lexus also receives the highest score in all six factors. BMW (631) ranks second and Audi (625) ranks third.

Among the nine mass market brands, Toyota ranks highest for the second consecutive year with a score of 621. Toyota also achieves the highest score in all six factors. Subaru (597) ranks second and Nissan (595) ranks third.

The 2019 Japan Navigation Systems Customer Satisfaction Index Study—OEM is based on responses from 969 luxury vehicle owners and 6,261 mass market vehicle owners who purchased a new vehicle equipped with a factory- or dealer-installed navigation system from April 2018 through March 2019. The study was fielded in July 2019. 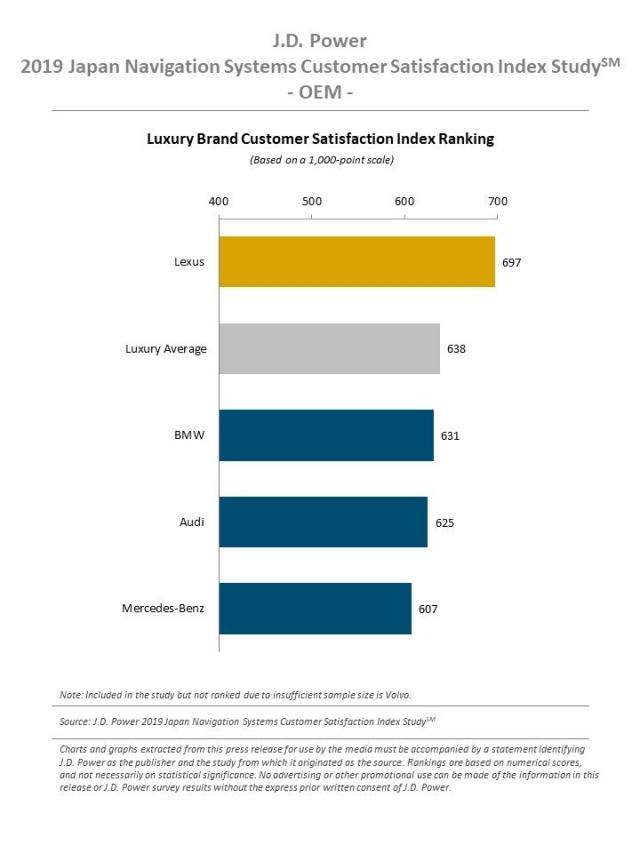 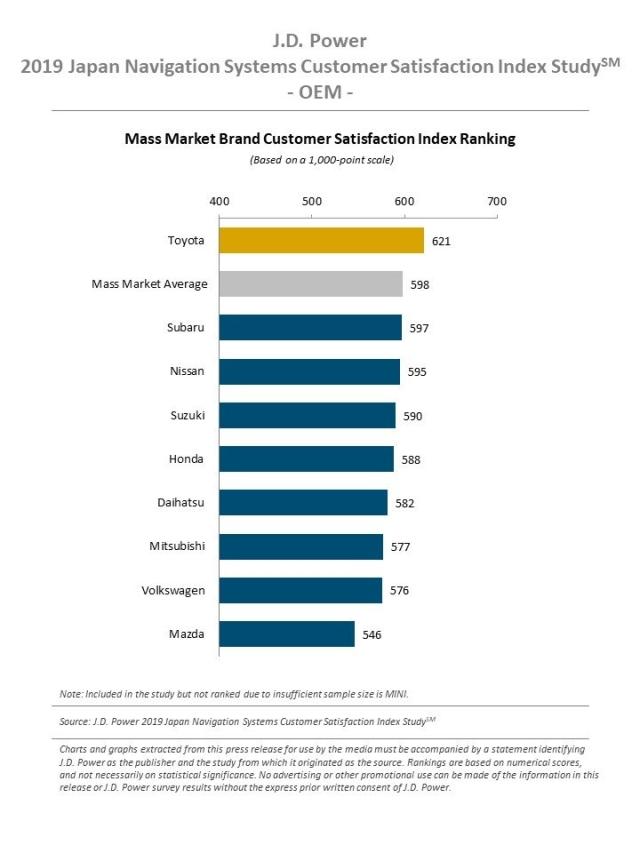