J.D. Power initial quality studies are conducted globally and serve as the industry benchmark for new-vehicle quality. In Japan, overall initial quality averages 67 problems per 100 vehicles (PP100) in 2018, compared with 76 PP100 in 2017 and 75 PP100 in 2016, indicating a significant improvement.

“The improvement in overall initial quality suggests that auto manufacturers have worked hard on vehicle quality, while more functions and features are being offered for new vehicles,” said Atsushi Kawahashi, Senior Director of the Automotive Division at J.D. Power. “Considering the progression toward autonomous driving, it is expected that consumers’ interest in safety features and new technologies will grow. With more vehicle owners using such safety features and new technologies, how auto manufacturers should maintain the current car quality could become an industry-wide challenge.”

Following are some of the key findings of the 2018 study:

Technology comes with its issues: More problems are reported in the ACEN category, compared with last year, including entertainment systems, voice recognition and Bluetooth, and particularly navigation systems—difficult to understand or operate, or installed in a poor location. However, problems related to failures and the accuracy of navigation systems are less frequently reported in 2018 than last year.

The 2018 Japan Initial Quality Study is based on responses from 22,387 purchasers of new vehicles in the first two to nine months of ownership. The online survey was fielded from May through June 2018. The study, now in its eighth year, measures new-vehicle quality in the first two to nine months of ownership. Vehicle quality is evaluated by owners across 233 problem areas in eight categories: vehicle exterior; driving experience; features/ controls/ displays; audio/ communication/ entertainment/ navigation (ACEN); seats; heating, ventilation and air conditioning (HVAC); vehicle interior; and engine/ transmission. All problems are summarized as the number of reported problems per 100 vehicles (PP100), with lower scores reflecting a higher quality performance.

[1] No official rankings are published due to an insufficient number of models. 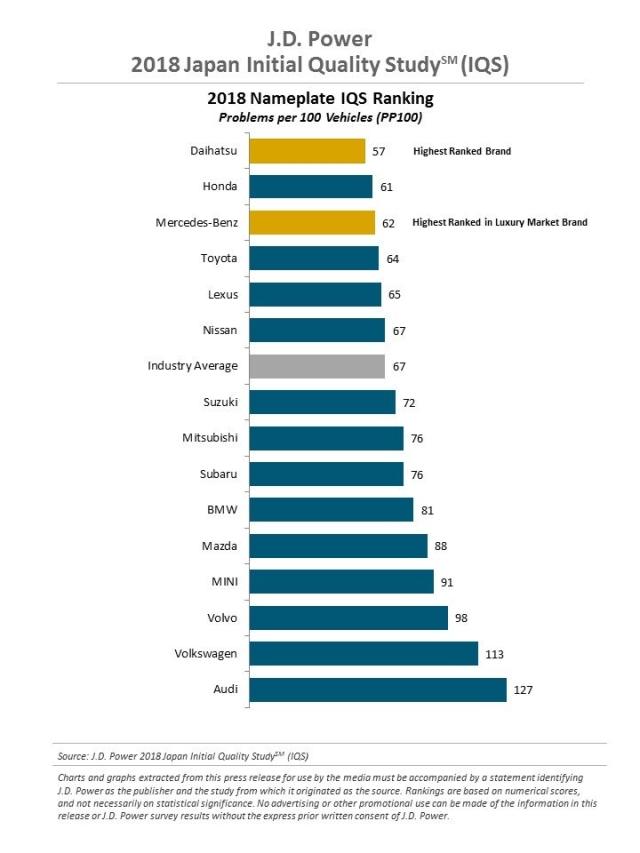 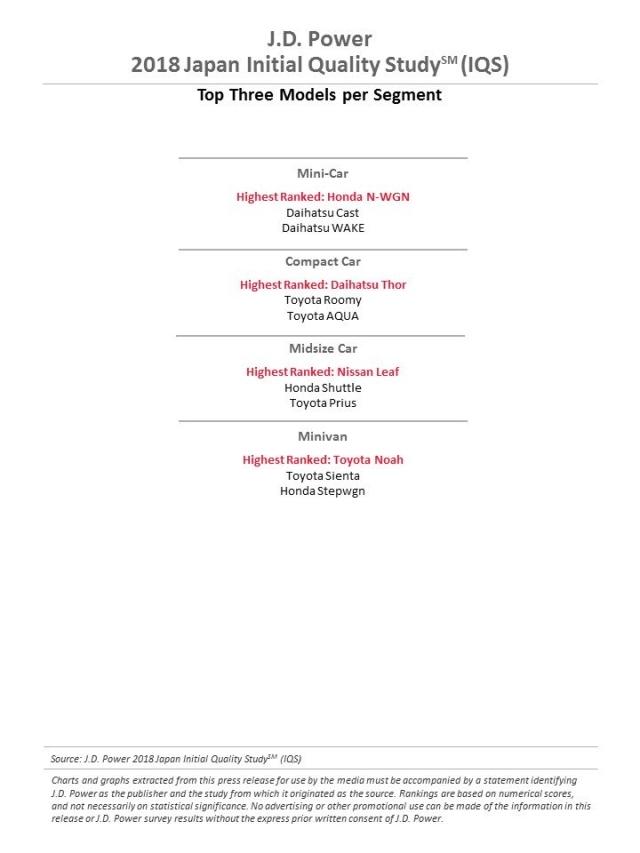